Developed by the University of Copenhagen the NN-Easy55 works on chlorophyll fluorescence. Numerous studies have shown that manganese deficiency has a unique effect on the emissions of chlorophyll fluorescence. Manganese deficiency is therefore detectable with chlorophyll fluorescence long before visual deficiency symptoms are present. This is due to the irreplaceable role of manganese in photosynthesis. The photosynthetic apparatus of plants do primarily consist of two groups of proteins called photosystems I and II. Photosynthesis is initiated when two chlorophyll molecules in photosystem II absorb light, which is then converted to chemical energy. This energy is transported to photosystem I followed by generation of carbohydrates that are essential for biomass production. Mn deficient plants have reduced capacity to convert light energy to chemical energy, while the amount of absorbed light often stays intact. This is caused by an impaired function of photosynthesis II where energy is inefficiently utilised by a plant as is the case during Mn deficiency. The PEU parameter is very sensitive to Mn deficiency and thus enables diagnosis of latent deficiency in very young plants. The NN-Easy55 is developed to calculate PEU values from complex fluorescence spectrums and therefore represents and efficient tool for the diagnosis of manganese deficiency 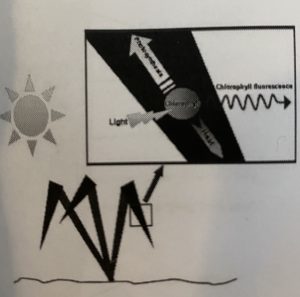 light being absorbed by chlorophyll molecules is either used for photosynthesis, lost as heat or reemitted as chlorophyll fluorescence

How to diagnose manganese deficiency Measuring with NN-Easy55
• Turn on the NN-Easy55 using the “ON/OFF” button. When the unit is ready for measurement,
“Ready” will appear on the display.
• Use a sample which is fully dark adapted (> 25minutes). Attach the leaf with the upper side facing up.
• Attach the leaf clip to the NN-Easy55 as shown in the picture to the right.
• Open the leaf clip by sliding the metal slide back. With a closed leaf clip the NN-Easy55 can not measure the fluorescence and the error message “Error Check Clip” will appear on the display.
• Press ”MEASURE” and keep the NN-Easy55 device steady during measurement. It is important that    light is permitted between the device and the leaf clip.
• After each measurement (1, 3 or 10 seconds depending on the system configuration), the fluorescence   parameter PEU will appear together with a graduation of manganese deficiency. The measurement        will  automatically be saved and the NN-Easy55 will return to “Ready” mode on the display.
• New measurements can now be performed with additional dark adapted samples.
• Assess the need of a potential manganese treatment from the table shown below.

The diagnosis kit is based on analysis with NN-Easy55 before and after manganese treatment
of a single leaf. The treatment is conducted with a specific solution that rapidly penetrates the
leaf surface and repairs the plant enzyme complex, which is affected by manganese
deficiency. After this treatment an increase in PEU relative to a control leaf proves that the
plant is suffering from manganese deficiency – and nothing else.
Important: Use gloves when handling the diagnosis kit and wash hands and working area
after use.
• Choose plant material having no symptoms but with comparable PEU values (at least 8 leaves). The  PEU values should preferably be below 80 before a clear effect of the manganese treatment can be. Note the individual PEU values from the each leaf.
• Spray half of the collected leaves on both the front and backside with the “NutriNostica
NN-Easy Isotonic Control” solution. This solution does not contain manganese.
• Incubate the leaves in the supplied zip-bags. It is important to keep the upper side of the leaf facing up against the light and white stripe on the bag downwards. Keep the bag air-tight.
• Spray the second half of the collected leaves with the “NutriNostica NN-Easy Manganese”solution on    both the front and backside and incubate the leaves in a similar manner as the control leaves.
• Leave the leaves at room temperature in light for 3-6 hours (for example under an architect lamp) but  not to close to the light (minimum distance of 50-80 cm). The bags should not increase in temperature.
• After the incubation period, the leaves should be dark adapted again by attaching the leaf clip on the      leaf inside the bag. The bag is then closed again.
• After 25 minutes with dark adaptation the PEU values are measured with the NN-Easy55.
• With increasing PEU values for the manganese treated leaves compared the control leaves, it can be        concluded that the leaves are manganese deficient.
• After use of the diagnosis kit, the leaf clips should be thoroughly washed to avoid manganese                contamination at subsequent measurements. The bags are contaminated during the test and recycling    of these is thus impossible.

View all posts by Sonic Essentials